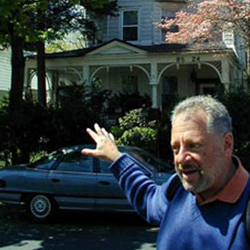 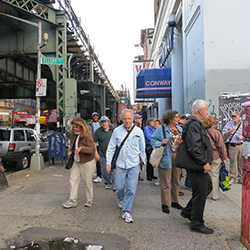 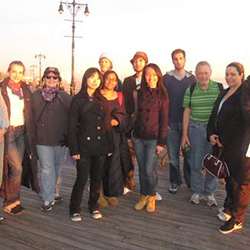 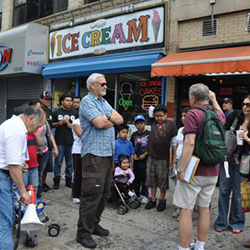 Jack Eichenbaum is a Queens native who holds a Ph.D. in urban geography.  His career began as a data collector and evaluator in the Property Division of the NYC Department of Finance, where he honed his observation skills. His expertise lies particularly in historical urban geography, migration, ethnicity and technological change.  He continually updates his familiarity with NYC by walking and leading walking tours in all five boroughs. He also teaches Geography of NYC annually at Hunter College (CUNY). In 2010, he was appointed Queens Borough Historian, where his agenda includes: convening people and organizations concerned with Queens history, education, promoting Queens history-related attractions and changing cultures.

Flushing is the site of North America's first proclamation of religious freedom: the Flushing Remonstrance of 1657 and the oldest extant house of worship in New York State: the Quaker Meeting House of 1694. The area is now the site of many new churches, temples, and mosques due to both a surge in the needs of contemporary immigrants and the availability of sizable plots of land in once-elite residential areas. We'll discuss the ecological and economic problems engendered by the new churches as well as the uncertain status of historic religious institutions.

Covers the historical and ecological setting of Queens largest park, and its previous incarnations as a salt hay meadow, a refuse dump, two World's Fairs, and site of the United Nations. Transportation and access issues at the park periphery are also discussed.

The World of the #7 Train Tour In Person

The transportation corridor between Grand Central Terminal and Flushing, learning what the #7 did to and for the communities in its path. Commentary encompasses colonial settlement patterns, demographic history, revolutions in transportation and industry, major public works projects, Garden City experiments, contemporary ethnicity, and food. Long Island City-Sunnyside-Flushing-Corona-Woodside-Jackson Heights, Lunch in Flushing's Asiatown.

Please note that tours are limited to 30 maximum.