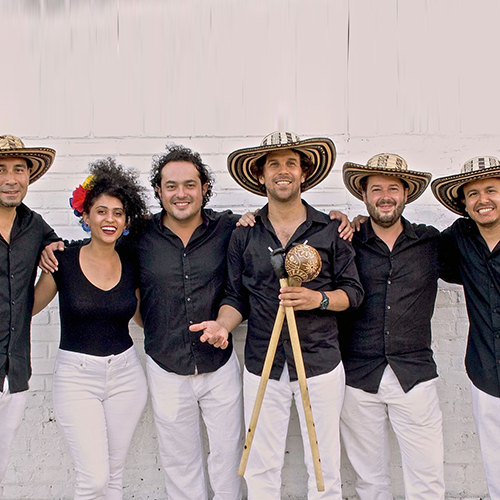 Martin Vejarano is a Colombian multi-instrumentalist, performer, composer and educator. Born to a dancer/choreographer and a filmmaker in Bogotá, Colombia, Martin was surrounded by the arts from an early age. Based in NYC since 2000 as a free-lance musician and educator, Martín holds degrees in Jazz and Music Theory from The Brooklyn-Queens Conservatory of Music and The City College of New York. As an educator and Colombian music instructor Martín has shared his knowledge and experiences with students in grade schools and universities in the United States, South America and Europe. Martín currently directs and leads four music ensembles: La Cumbiamba NY, Cumbia River Band, Chia’s Dance Party and NYC Gaita Club.

Flushing Town Hall teaching artist Martin Vejarano and his band La Cumbiamba NY introduces the evolving sounds of the gaitas and tambores, originally developed when Colombia was a Spanish colony during the 17th century, that continues to evolve to this day.  Cumbia Roots is an educational assembly with high energy that inspires students to explore their cultural roots and to celebrate diversity. This program is also available as a live virtual assembly, which includes a screening of the pre-recorded footage of music and dance performance, live demonstrations and a live Q&A.

This assembly is led by Martin Vejarano and Cumbia River Band, presenting a bilingual and environmentally sensitive repertoire with an original format featuring: tuba, accordion, guitar, drums, Colombian percussion, clarinet and vocals. In this program, Martin shares his insights on the creative process while finding common ground among the music of New Orleans, the Balkans and Colombia, all of which has inspired him. This assembly will expose students to the instruments’ characteristics, background, and their journey throughout the world as different cultures adopted these instruments to suit their own cultural expression.

An inspiring world music program where Martin Vejarano and the students will honor the culture-sharing process while developing a show composed of diverse rhythms, dance moves and songs from around the world. Students will be exposed and encouraged to learn and practice different percussion instruments, vocal arrangements for a multilingual repertoire of family music, as well as dance steps inspired by different cultural traditions. This program can be offered as an interactive workshop, assembly or residency.