—Visit www.flushingtownhall.org for tickets or to donate in support of the nonprofit— 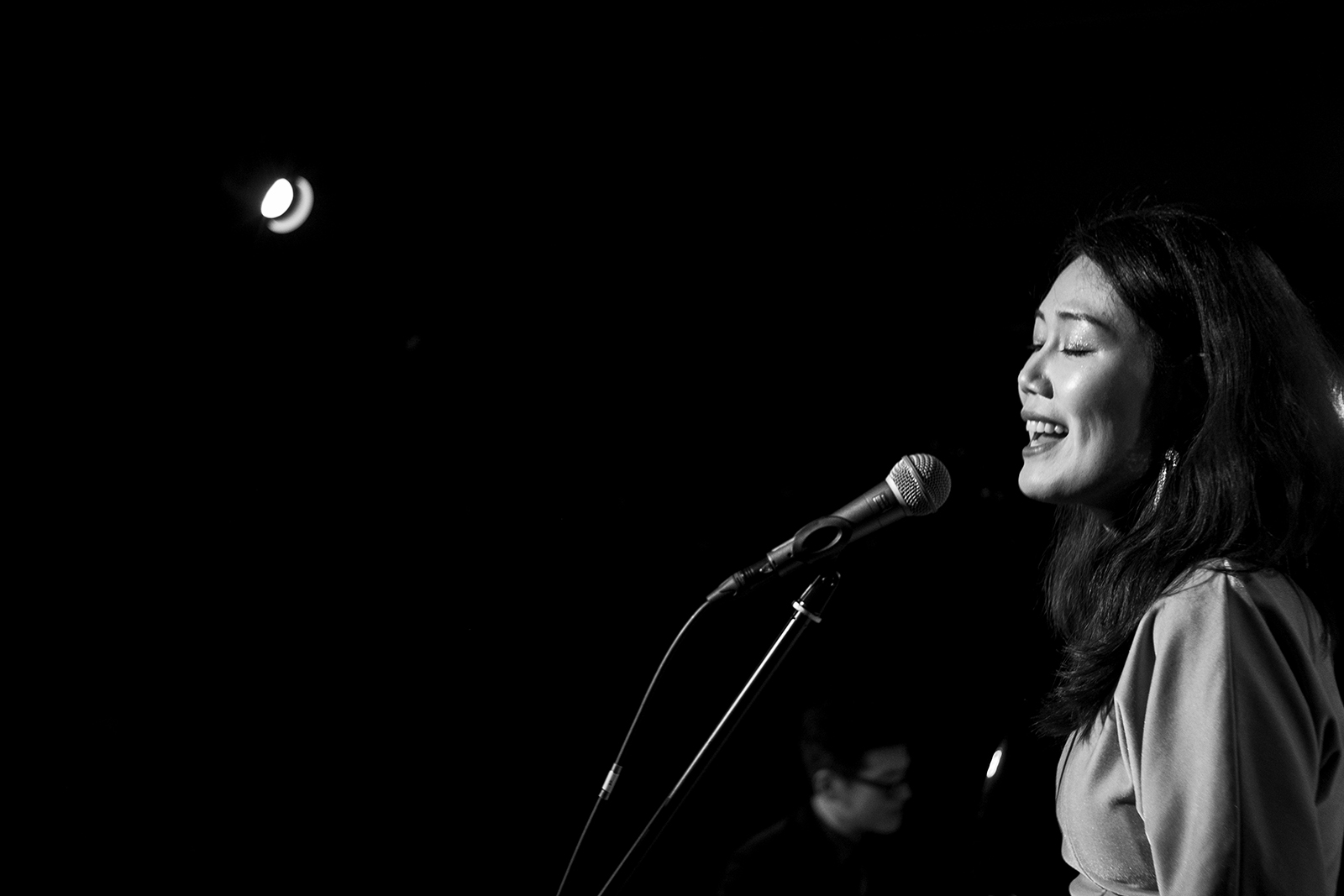 (Flushing, N.Y.)—This May, Flushing Town Hall honors Asian/Pacific American Heritage Month with the return of Crazy Talented Asians & Friends: An Evening of Animated Shorts and a moving performance from the Jihye Lee Quintet, live from the stage at Flushing Town Hall.

Additional programs this May include a concert from the award-winning, Afro-Cuban roots and jazz duo OKAN, and Flushing Town Hall’s monthly Louis Armstrong Legacy Virtual Jazz Jam—this May featuring tunes about moms, just in time for Mother’s Day.

APA Heritage Month, which annually celebrates the lives and contributions of Asian Americans and Pacific Islanders in the United States, gains increased significance this year as these same Americans face a rise in racist violence and bigotry.

“Flushing Town Hall’s mission is to bring people together by presenting arts and culture from around the world. We respond to bigotry through the arts,” says Executive & Artistic Director Ellen Kodadek. “All artists have a home on our stage, and we remain committed to presenting and learning from diverse cultural traditions, stories, and artists from around the globe, as well as right here at home.”

As noted by the Library of Congress and Smithsonian Institution, of which Flushing Town Hall is an affiliate, “the month of May was chosen to commemorate the immigration of the first Japanese to the United States on May 17, 1843, and to mark the anniversary of the completion of the transcontinental railroad on May 10, 1869. The majority of the workers who laid the tracks were Chinese immigrants.”

The neighborhood of Flushing, often referred to as the Chinatown of Queens, is in fact home to a very diverse population of Asians and Asian Americans that includes people of Korean, Taiwanese, and mainland Chinese descent, as well as communities of South Asian and Latin American descent.

The borough of Queens is the most diverse county in all of the United States, where more languages are spoken than anywhere else in the world, and the programming at Flushing Town Hall reflects that diversity, bringing global arts to its global community.

On Friday, May 21 at 7:00 PM (ET), the Jihye Lee Quintet will perform live from the stage at Flushing Town Hall for an all-virtual audience. The livestreamed concert, titled “Rest in the Arms of Motherlands” and featuring Lee’s original compositions and arrangements of well-known songs, will be an elegy for the victims of anti-Asian hate crimes. An all-female, Korean jazz ensemble, the Jihye Lee Quintet will offer a special dedication to the women killed in the spa shootings this March in Atlanta, Georgia. The quintet features Lee on vocals alongside Hayoung Lyou (keys), Haeun Joo (piano), Jeonglim Yang (bass), and Dayeon Seok (drums).

The event will be presented free of charge with a suggested, pay-what-you-can donation. Fifty percent of the funds raised will support the nonprofit, global arts presenter and fifty percent will be donated to the Korean American Family Service Center (KAFSC) in support of their Rainbow House Shelter, which provides comprehensive and culturally-competent services to women and children in crisis.

On Saturday, May 29 at 6:00 PM (ET), Flushing Town Hall celebrates APA Heritage Month with the return of Crazy Talented Asians & Friends: An Evening of Animation Shorts, showcasing a wide-range of animated short films by Asian and Asian American artists. The films present a wide range of stories and experiences, as diverse as the APA community itself, through masterful storytelling, art direction, animation, production, and sound design. The selection jury was led by Ms. Hsiang Chin Moe, SVA’s BFA Animation Chair and Lead Advisor for this event, along with a panel of seasoned professionals in animation art: Wen-Chin Hsu at Pixar, Gonzalo Janer at Nickelodeon, Pilar Newton at Pilar Toons, CJ Walker at Titmouse, and Wendy Cong Zhao at CUNY Queens College. There will be a live Q&A with artists following the screenings.

Taking their name from the word for “heart” in the Afro-Cuban religion of Santeria, OKAN is a women-led duo that fuses Afro-Cuban roots with jazz, folk, and global rhythms in songs about immigration, courage, and love. OKAN is the winner of an Independent Music Award and Juno award (Canada’s equivalent of a Grammy) and has put out two albums, Espiral and Sombras. Audiences can tune in for their Friday, May 14 virtual concert at 7:00 PM (ET) and stay for a live Q&A with co-leaders Elizabeth Rodriguez and Magdelys Savigne.

Musicians interested in participating should email education@flushingtownhall.org with the three- to four-minute tune they intend to play. The performance can be live or a pre-recorded audio or video (but not a professional, edited recording, such as a CD or YouTube video). Selection is on a first-come, first-served basis. Anyone is invited to join the audience via Flushing Town Hall’s Facebook page or Zoom on Wednesday, May 12 at 7:00 PM (ET).

Led by Carol Sudhalter and the FTH house band, the monthly jam invites up to 15 musicians from around the world and right here in Queens to play a tune on the month’s theme celebrating Mother’s Day. To participate, musicians should email education@flushingtownhall.org and identify their intended three- to four-minute piece. All members of the public are welcome to join the virtual audience for this event.

A virtual concert from the female, Afro-Cuban jazz power duo OKAN, followed by a live Q&A with the performers. Tickets are required to stream this virtual performance.

Friday, May 21 at 7:00 PM (ET)
Jihye Lee Quintet
Free, with a suggested, pay-what-you-can donation in support of Flushing Town Hall and the Korean American Family Service Center’s Rainbow House
​​​​​
The all-female, Korean jazz ensemble led by Jihye Lee will perform “Rest in the Arms of Motherlands,” an elegy for victims of anti-Asian hate crimes, featuring Lee’s original compositions and arrangements of well-known songs. The quintet performs live from the state at Flushing Town Hall for a virtual audience.

NEW WEBSITE:
Flushing Town Hall is excited to announce the launch of its redesigned website: https://www.flushingtownhall.org. The new site improves access to online events, educational programming, artist services, and rental availabilities. It also features a brand new PRESS ROOM with the latest press releases and news coverage. As always, it remains a great source for information about the history and mission of the organization, as well as important contact and community engagement information.

A majority of Flushing Town Hall’s FTH At Home! virtual programming is presented for free to the general public but donations in any amount are appreciated to support the artists and the nonprofit cultural organization as they continue to provide programming and entertainment across New York and the world.

Flushing Town Hall’s facilities are temporarily closed to the public in accordance with COVID-19 safety regulations. Current programs are being presented virtually.

Flushing Town Hall (FTH), a Smithsonian affiliate, presents multi-disciplinary global arts that engage and educate the global communities of Queens and New York City, in order to foster mutual appreciation. As advocates of arts equity since 1979, we support local, immigrant, national, and international artists, developing partnerships and collaborations that enhance our efforts. As a member of New York City’s Cultural Institutions Group (CIG), we serve to restore, manage and program the historic 1862 landmark on behalf of the City of New York. FTH celebrates the history of Queens as the home of Jazz, by presenting the finest in Jazz performance. We are committed to arts education and hands-on learning, for the arts-curious, arts enthusiasts, and professional artists. We serve one of the most diverse communities in the world and strive to uphold the legacy of inclusiveness that has defined our community since the Flushing Remonstrance of 1657.

Throughout the COVID-19 pandemic, while our venue remains temporarily closed to audiences in accordance with social distancing guidelines, we are proudly presenting performances, exhibitions, panel discussions, and educational activities online through our virtual initiatives, FTH at Home! and Global Arts for Global Kids.

Although we cannot list every donor, Flushing Town Hall is grateful for all gifts received and wishes to thank everyone for their ongoing generosity.

Special thanks to the Howard Gilman Foundation, Flushing Town Hall was able to purchase equipment needed to live stream and record from its theatre.Louis Armstrong Legacy Virtual Jazz Jam is supported in part by a grant from The Louis Armstrong Educational Foundation. Crazy Talented Asians & Friends: An Evening of Live Comedy – Triumphing Over Quarantine! is sponsored by a generous anonymous donor. Flushing Town Hall thanks the sponsor and the numerous community volunteers and viewers for your strong support.

Flushing Town Hall greatly appreciates the supporters of our current campaign, Step Up for Flushing Town Hall, in response to the COVID-19 pandemic. If you are able and willing to help, please click here to learn more and donate today.

We have done our best to recognize donations correctly, but should your recognition be incorrect, please contact Jessica Peña, Director of Development, at jpena@flushingtownhall.org.