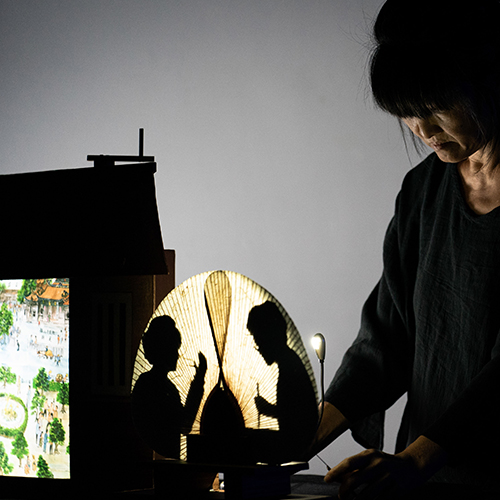 Spica Wobbe (Shu-yun Cheng) is a puppetry artist originally from Taiwan. In addition to Flushing Town Hall, her work has been seen in Taiwan, Hong Kong, Korea, Japan, Holland, Germany, Israel, Austria and the United States. Now based in NYC, she has worked as a puppetry designer, performer and educator, since she received her M.A. in Educational Theater from New York University in 2003. She established Double Image Theater Lab in 2011 to create cross-cultural productions that explore the world of the past and the present.

Spica received the Exemplary Teaching Artist Award from New York University in 2014. She is a two-time recipient of the Jim Henson Foundation grant and is a 2015 Sandglass Theater New Vision Series Resident Artist. Spica was the featured artist in “Shadow, Light... Hide & Seek Exhibit” at WenShand Theater in Taipei in 2015 and “Heaven of Puppets Exhibit” at Taipei Puppet Museum in 2016.

Learn a brief history of shadow theater, discover the science behind the theory of light and shadow, develop literacy skills using “the interview” as a tool to uncover personal and family stories, and get inspired to perform your very own shadow puppet theater! This program includes a pre-recorded performance video, live demonstrations and a live Q & A.

The Memory Project is a hands-on activity based workshop series catering specifically to older adults in which visual arts, theater and puppetry are used as a medium for personal storytelling. Programs, including Pop-Up and Accordion Book Making, Shadow Puppetry, Life Scroll, Table Top Puppets and more are tailored specifically for the adult learners at each senior center. Collaborative learning is integral to each program providing opportunities for social engagement as students discuss their process of artmaking. Each project is based on “a sense of play” to encourage exploration, discovery and experimentation. Synchronous as well as additional asynchronous learning allows for artmaking skills to build. All workshops are facilitated by FTH teaching artists Spica Wobbe and Karen Oughtred.