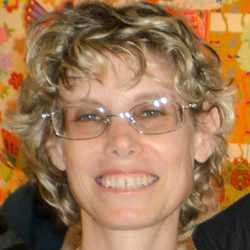 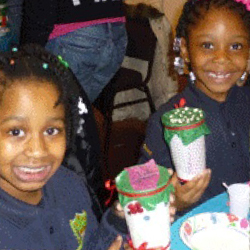 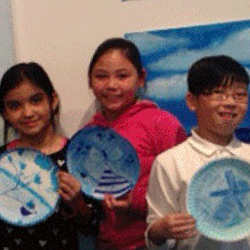 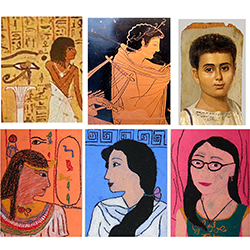 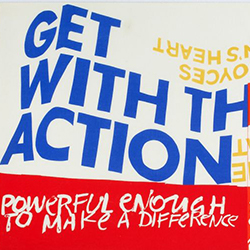 Mixed media visual artist, composer, curator and writer, Tina Seligman has been a teaching Artist-in-Residence at Flushing Council on Culture and the Arts since 2000. Her workshops for visiting classes integrate hands-on projects with academic curriculum, art history, and related music to offer a multi-sensory experience. She has created and facilitated art programs for CASA, Parents as Art Partners, and NYSCA Artist-in-Residence Mentor grants, as well as for in-school residencies and has worked as a set designer for Adam Crescenzi’s CASA productions.  In 2004, she was invited to serve as a panelist for the Arts in the Schools Grant Program through Queens Council on the Arts.

Tina had solo exhibits in 2020 at the GAC Gallery in Bayside and in 2018 at Flushing Town Hall.  Her artwork has been exhibited in Manhattan, Queens, and Long Island and her work resides in corporate and private collections.  George Xiong used Tina’s composition September Etude for flute, recorded by Jo Brand, as an accompaniment to a video about his series of contemporary Chinese seal paintings.  Tina has curated two exhibits at Flushing Town Hall and as an art journalist, she has written for Art of the Times magazine, and wrote an essay for artist Duoling Huang’s book The Cultural Landscape.  Tina’s poetry has been published by P.S. 1 Contemporary Museum website, The Moon as Text, and Cicada Haiku Quarterly, among other periodicals.  She earned a BA in Art at Queens College and attended the Art Students League for 6 summers.

Following a lively interactive discussion on collage inspired by Louis Armstrong's collages and work by contemporary sound artists, participants will create percussion instruments using every day paper cups and recycled and found materials. We will listen to the "sound of numbers," and use the finished instruments to jam with Satchmo's music to experience how jazz artists converse with each other. Connections between musical and visual storytelling, rhythms, colors, shapes, patterns, use of text (including onomatopoeia), and compositional elements will be discussed during the demonstration. CLICK HERE to download for more information. For grades: Prek to 5

Dutch-Style Delft Plates: Flushing Then and Now (for all ages)

Inspired by blue and white Chinese ceramics produced in Delft, Holland and in England, Delftware pottery was later replicated during the 1939 and 1964 Flushing World's Fairs in the form of commemorative souvenir plates. The history of the Dutch settlement in Flushing, named after Holland's city of Vlissingen, will be presented along with contemporary images of the neighborhood. Following a demonstration, students will use paper plates, blue markers, crayons, oil pastels and pencils to combine Dutch imagery with contemporary images of Flushing to create Delft-style plates. A CD of flute music by 17th Century Dutch composer, Jacob van Eyck will be played while participants are creating their work

Ancient Selifes: Self-Portraits in the style of Ancient Egyptain, Greek and Roman Art (all ages)

In contemporary life, anyone can take a "selfie" using a smartphone or other electronic device. During ancient times, artists and artisans did not produce "selfies" (self-portraits). Portraits were only created for upper classes and those in power. Just as our "selfies" provide insight about our culture, we can learn about ancient belief systems, music, art, fashion, lifestyles, architecture, flora, fauna, socio-economic, and political structures through their use of color, stylization, and function. After an interactive comparsion of these ancient cultures and how they relate to our contemporary life, the students will create self-portraits in the style of Ancient Egyptian, Greek and Roman Art. CDs of ancient style music will be played for each culture based on scholars' interpretation.

The 1960s and Today: Social Commentary and Activism in Pop Art (all ages)

After the more conservative, 1950s, the 1960s, saw a burst of social activism for Civil Rights, Feminism, and against the Vietnam War. Those and other major events were reflected in the arts, music, and fashion of the time. Blurring the distinction between commerical advertising and fine art, Andy Warhol's iconic Pop Art challenged perceptions of economic status, politics, celebrity, and individuality. Corita Kent, inspired by Warhol's use of bright flat color, text, and advertising, created the iconic "LOVE" stamp, and works that were often used as posters for protests and peace marches. Although we have progressed on many levels, we still face similar human rights issues including the current rise in bullying. Following an interactive exploration of the 1960s and how it relates to our lives today, students will create ant-bullying posters inspired by Pop Art. 1960s music will be played while the students are working.