Can't make it in person? Watch this show from anywhere in the world! Purchase a virtual ticket for $5 to get LIVE and ON-DEMAND access to watch whenever you want up to 90 days after the show!*

*On-Demand Access expiration dates vary and are set forth by the artists and Flushing Town Hall programming staff.
All individuals must show proof of vaccination against COVID-19 and matching identification to attend this event. If you are interested in attending this event in person, please read the full COVID Safety Policy carefully before purchasing tickets.


On October 22nd, the world renowned Hazmat Modine will return to Flushing Town Hall for another show stopping performance.

While Hazmat Modine is based in New York City, this band is truly a global sensation, having performed in over 40 countries worldwide over the last 15 years.

This new collection of original material finds Hazmat deep in command of their self-created idiom — swimming in international waters but never far from the American coast. Malian riffs infuse with Mississippi mud and Tin Pan Alley, stretching the band’s roots aesthetic to include notes of hibiscus and the buzz of mosquitos. There are songs about death, striving, hoarding, time and the march of dementia. Soaring horns and wailing harmonica are joined by the clang of modern India and the murmur of China, a distillation of Hazmat Modine’s travels through time, place and sound. Throughout, the music weaves lyrics that reflect on the times and troubles of the world we currently live in. This is the bands most mature and original music yet, something so Hazmatian that it needs its own genre to define it… Familiar yet un-trodden, music that celebrates humanity and mortality.

Performances by Hazmat Modine are ever-changing, as the group takes influences from their travels throughout the globe into each new venue.

“... The songs are sublime again, the arrangements phenomenal, the vocals of Schuman and the band fantastic, and the passion with which they play unsurpassed...Sorry, but this is an album that I can only talk about in superlatives - for me this is already the topper of 2019…”
Moors magazine -Holland.


“…There is, in all likelihood, no other American band that so definitively captures the true meaning of roots music then Wade Schuman’s 9-piece New York collective.
Whilst touchstones abound, and lashings of blues, New Orleans flavored jazz and funk, Calypso, Balkanova, Klezmer, Gypsy Jazz, and African grooves are all thrown in the crucible, what comes out is entirely original and intoxicating…Comes the time to pass judgement on the years best, Box of Breath has “contender" written all over it.”
Rhythms magazine -Australia.

“with this haunting humdinger of a fifth album, the band has hit an apotheosis that consolidates claims to it being one of the most dynamic and distinctive US roots collectives…Befitting a band that has toured are then 40 countries, Hazmat Modine takes delight in bending musical boundaries. Global hues add considerable clout and intrigue to the bands brand off Bohemian blues.”
Tony Hillier - The Australian.

"This is a New York band that has achieved the tour de force, by itself, of representing the entire history of American music. A vast musical melting pot in which all genres merge to form one! There are Blues, Swing, sounds of music from Eastern Europe, Folk, Jamaican and Hawaiian consonances, and so on…In all, 54 minutes for a fascinating overview of some great and magnificent American musical territories. Very nice album!”
Dominique Boulay Paris - Move & Blues Magazine France

This is sure to be an exciting show you don't want to miss. Buy your tickets now! 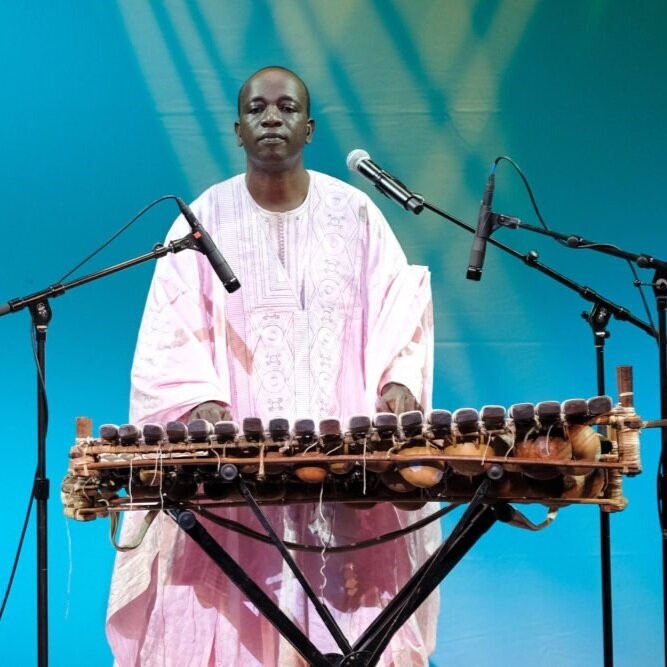 Balla Kouyaté’s lineage goes back more than 800 years to Balla Faséké, the first of an unbroken line of djelis in the Kouyaté clan. The word “djeli” derives from the Mandinka language, meaning the oral historians, musicians, and performers who keep alive and celebrate the history of the Mandé people of Mali, Guinea, and other West African countries. Kouyaté explains, “It means blood and speaks to the central role we play in our society.” Kouyaté’s dedication to carrying on his family’s hereditary role as a djeli, his musical virtuosity on the balafon (the West African antecedent of the xylophone), and his humble nature and humility set him apart from others.

Oral tradition holds that when the emperor Sundiata overthrew Soumaora Kante, he appointed the Kouyaté family to protect the balafon. Today, Balla Kouyaté is a virtuoso player of this instrument. Played with mallets, the balafon is made up of wooden slats and rows of calabash gourds, which serve as natural amplifiers. The original musical instrument, known as the “Sosso-Bala,” survives in Kouyaté’s father’s home village of Niagassola, on the Mali-Guinea border. In 2001, the Sosso-Bala was declared a item of intangible cultural heritage by UNESCO and is brought out once a year for ceremonial playing.

The Kouyaté family is regarded as the original praise-singers of the Malinké people, one of the ethnic groups found across much of West Africa. Balla Kouyaté learned to play the balafon as a child and was soon playing alongside his mother, motivating agricultural laborers during harvest season. As a young adult, he emigrated to the U.S. in 2000 to pursue music as a profession, settling in Massachusetts in 2001.

Today, he is ever present performing at weddings, baptisms, naming ceremonies, and other domestic ceremonies within the West African immigrant communities of Boston, New York City, and beyond. He is equally motivated to share his music with the larger world through his work as a soloist, arranger, and bandleader. Often billed as fusion, his music explores jazz and other outside influences, while remaining consciously rooted in the Mandé tradition.

Kouyaté is featured on more than 25 albums, including Yo-Yo Ma’s Songs of Joy and Peace and Sing Me Home. He also regularly plays with world-renowned West African musicians touring the States. In 2004, Kouyaté joined NEA National Heritage Fellow Sidiki Conde for a month-long residency at Carnegie Hall. Recent awards include a 2010 Mass Cultural Council Fellowship in the Traditional Arts, a 2014 Mass Cultural Council Traditional Arts Apprenticeship awarded to Kouyaté and his son Sekou, and a 2015 Brother Thomas Fellowship awarded by the Boston Foundation. He is a frequent visiting lecturer/performer at colleges and museums throughout the United States. He is on the faculty at the New England Conservatory.