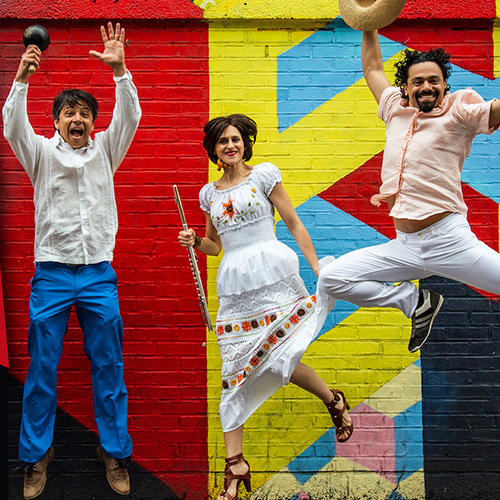 Folklore Urbano NYC has been producing, uniting, creating, and educating since 2000. Led by Artistic Director Pablo Mayor, the musical production company has been uplifting and inspiring through its renowned ensembles, grassroots programs including Cumbia for Kids and the music festival Encuentro NYC, compositional work, and collaborations with iD Studio Theater in the South Bronx. Notable new works include “Unspoken Tales,” a winner of a 2019 Culpeper Arts and Culture grant, supported by the Rockefeller Brothers Fund, and the release of its fourth album El Barrio Project-SALSA. Folklore Urbano NYC finds continuity in a mission that serves to gather people and artists of all backgrounds, to understand and celebrate cultural origins, and to bring joy through the power of the arts, creating #GlobalMusicToUnify.

Teaching artists include the following:

Pablo Mayor / Folklore Urbano NYC Artistic Director, Cumbia for Kids Musical Director
Pablo Mayor established his musical production company Folklore Urbano NYC in 2000, shortly upon arriving to New York City, with a mission of #GlobalMusicToUnify. Winner of the 2020 Artist Award from ArtsWestchester, his compositions and creative concepts forge new territory in the global landscape of contemporary Latin American music as he expresses the nuance of each culture he encounters through his compositions and piano. Originally from Cali, Colombia, Pablo dedicated his first sixteen years in NYC to writing, producing, and promoting Colombian music, including three albums with his band the Folklore Urbano Orchestra and an international tour. Pablo is a cultural community leader and holds a BM and MM in Jazz Arranging from the University of North Texas.

Anna Povich de Mayor / Cumbia for Kids Co-Director
Anna Povich de Mayor is a flutist, producer, and educator from the USA, known for her work as a chamber musician, educator, and promoter of Colombian music. Anna holds both an MM and a DMA in flute performance from SUNY Stony Brook. She manages Folklore Urbano NYC performances and educational program Cumbia for Kids, as well as performs with her husband. Previously she was on the faculty at Turtle Bay Music School in Manhattan 2003-2020 where she taught flute, coached chamber music, and co-directed their annual residency on Colombian music. She now works on programming at iD Studio in the south Bronx. In addition to Flushing Town Hall, Anna has worked with such organizations as Carnegie Hall, the 92nd St Y, among others. She also directs the “Tarrytown Arts Camp” in Westchester each summer.

Daniel Fetecua Soto / Cumbia for Kids Co-Artistic Director and Choreographer
Daniel Fetecua Soto, from Bogotá, Colombia, holds a BFA from Folkwang-University of the Arts in Germany, and has appeared as guest artist in Pina Bausch’s masterpieces, Rite of Spring and Tannhäuser. As a soloist member of the Limon Dance Company for ten years (2006-2016), Daniel continues to work as Master teacher of the Limón technique, reconstructor of Limon's repertory, and faculty member of the Limon Institute and Limón4Kids program. He is also a founder and artistic director of Pajarillo Pinta’o (a traditional Colombian dance company) and D-Moves (a Colombian contemporary dance project). As a longtime collaborator with Pablo Mayor, together they have created "Amalgama", El Barrio Project-SALSA’s “Black is Beautiful” video. Daniel also serves as adjunct dance faculty at the NYU Tisch School of the Arts in 2019 and currently on the faculty at Universidad del Atlantico in Barranquilla, Colombia.

Folklore Urbano NYC's Cumbia for Kids presents the rich musical and dance traditions of Colombia, taking its audiences on a journey through a diverse country whose rhythms range from the soulful African currulao found in the jungles of the Pacific coast, to the frenetic joropo from the Eastern Plains region bordering Venezuela, to the charming bambuco fiestero found in the region where coffee grows high up in the Andes mountains. The audiences will be clapping, singing along, and stomping their feet from start to finish, as musicians and dancers share the joyful traditions of Colombia presented with the impeccable artistry of these world-renowned artists, with original music and dance designed to appeal to audiences of all ages. This assembly is also available as a virtual program, which includes pre-recorded footage as well as live interaction.

The program takes students on a journey through the four main geographical regions of Colombia, teaching a range of its diverse traditions from the cowboy music of the Llanos Orientales to the African rhythms of the Pacific Coast. Pablo and Anna Mayor lead original songs in Spanish, teach Afro-Latino rhythms on the traditional drums and basic melodies on the gaita flutes from Indigenous communities. Daniel Fetecua leads students in dance and creative movement inspired by Colombia’s diverse dance traditions. The comprehensive curriculum includes lessons on culture, geography and language, and celebrates diversity as it highlights the Spanish, Indigenous, and African roots of Latin America. The program is available as a one-time workshop or a residency. The residency concludes with the students performing on stage and showcasing what they have learned over the courses with the members of Folklore Urbano NYC Orchestra in a scripted production of original music and choreography. For grades K-6!

Pablo Mayor and members of his renowned band Pablo Mayor's Folklore Urbano Orchestra, present a clinic on traditional Colombian rhythms, introducing various rhythms such as cumbia, puya, currulao, and how they apply to the jazz band format.  The group sheds new light on Pablo's original compositions and arrangements of traditional Colombian standards with space for extended improvisations allowed by the jazz format.  For Middle School to College.