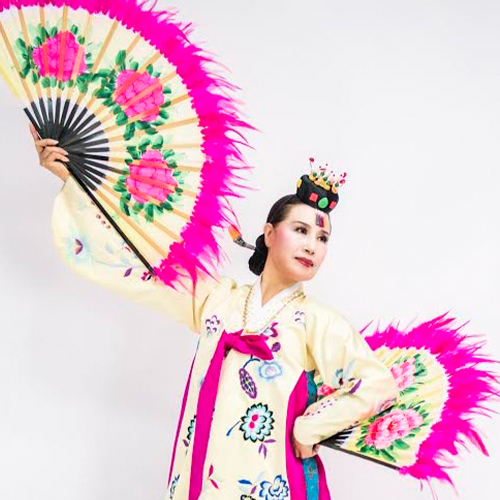 Songhee Lee-Chung, is a dancer specializing in traditional Korean dance. Upon graduating from University of Pusan, Korea, she joined the Pusan Metropolitan Dance Company and became a principal dancer. In 1997, Songhee had her first solo recital “Karma” in NYC at the Hudson Guild Theater. Since then, she has been actively performing around the world and US, at such venues as Flushing Town Hall, Greek National Dance Theater, CID UNESCO World Congress on Dance, NEA Montana Folk Festival and International Festival at Chihuahua, Mexico. She was also appointed as a member Artist teacher for K-12 public school for “Spotlight Korea” at The Korean Cultural Center New York from 2014. Currently, Song Hee is Artistic Director and Choreographer for the Songhee Lee Dance Company which includes the children's dance initiative, Cheongsah Chorong; she is also an instructor at Lotus Music and Dance school and performance member of KTPAA "Sound of Korea".

Traditional Korean dances incorporate some sort of storyline representing Korean life in the early years. For example, Jindo Buk Chum (drum dance) has roots in the nong-ak dance, which was traditionally performed in rice farming villages in order to ensure and to celebrate a good harvest. This assembly, presented by master dancer Songhee Lee, introduces different traditional Korean dances, as well as related vocabulary and folk terms. Students are encouraged to interact with the artist by dancing with Buchae (fans), Sogo (hand-drums), and Janggo (hour-glass drums).

In this workshop, students will be exposed to the various traditional folk dances of Korea such as Buchaechum (fan dance) which combines the grace of the music and the shifting of geometric designs with the fans, Janggo (hour-glass drum dance) where dancers play a double-headed drum in the shape of an hour-glass that is strapped to their body while they dance and spin, Sogo Chum (small hand-drum dance) where the dancers move with a small drum in one hand and a stick in the other, and the Jindo Buk Chum (drum dance) a dynamic dance traditionally performed to ensure and celebrate a good harvest. Students are encouraged to demonstrate what they have learned through a simple dance recital at the end of the workshop.