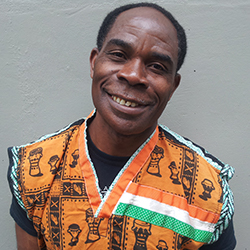 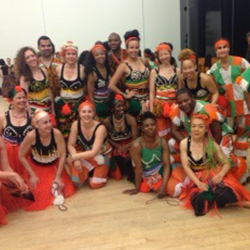 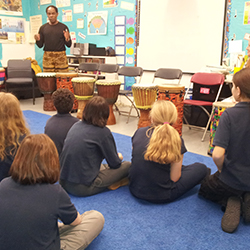 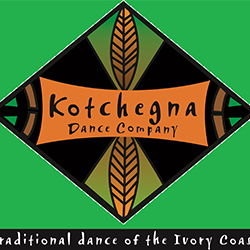 Born into the sacred stilt-dancing tradition of the Mahouka people in northwest Ivory Coast, Vado Diomande was born to dance. His father and uncle taught him the sacred ways, and soon Vado demonstrated rare excellence in the age-old customs. Discovered as an adolescent by talent scouts, Vado joined the budding Ballet National de Cote D’Ivoire in Abidjan, training in the traditional dances of over 60 ethnic groups of the Ivory Coast. Hailed as a captivating performer internationally, Vado’s career as a principal dancer spanned 15 years in the Ballet. Most impressive were his acrobatic dances of the Tall Mask, “God of the Sacred Forest”, Gue-Pelou. In 1989, Vado established his own dance company, L’Ensemble Kokiegna d’Abidjan, in Abidjan, touring Ivory Coast and Australia. He re-established his company in New York City in 1994 as Kotchegna Dance Company, developing a corps of multicultural dancers and a repertoire that is widely loved and admired.  As a master dance teacher, his inspiration leads his students to pursue both dancing and drumming, in true African tradition. He taught at the Djoniba Dance & Drum Centre from 1994 - 2006, as well as at Alvin Ailey, Manhattanville College, Fareta, Ifetayo, PMT Studio, New Dance Group and Black River Studios and gives workshops to schools and colleges everywhere.

Flushing Town Hall teaching artist Vado Diomande presents a combination of dance and drumming for workshops or residencies. Students begin with a warmup, then they are introduced to a series of steps, and finally the steps are put together with the drum rhythms and danced across the floor. Students learn how the drum and dancing fit together with live accompaniment.  This program can be developed into an 8-week residency with a culminating performance and an additional base drummer.

Vado Diomande introduces the rhythms of the Ivory Coast of Africa. Students learn to listen deeply, maintain a rhythm, accompany a lead drummer, support a soloist, and be a part of a collective expression. Small drums are available to rent or purchase for use during the program.  This program can be developed into an 8-week residency with a culminating performance.

Vado Diomande and Kotchegna Dance Company & Drum Corps introduce audiences to the performance and cultural traditions of the villages of Ivory Coast, West Africa through a series of dances, each accompanied by song, drumming and traditional costumes. Audiences have the opportunity to directly engage with the company as Kotchegna leads viewers through the language and meaning of songs, the anatomy of a West African drum, and short, interactive choreography that will help them become acquainted with the diverse people of Ivory Coast. The live virtual assembly includes pre-recorded footage as well as live interaction.

Kotchegna Dance Company & Drum Corps perform extensively throughout New York City and the US, thrilling audiences with the energy and joy of Ivory Coast dance and rhythms from West Africa. Kotchegna means messenger in Mahou, a dialect of the Ivory Coast and the native language of the company director, Vado Diomande. Kotchegna seeks to impart the village traditions of over 60 different ethnic groups comprising the country through performance and teaching. The performance features spectacular mask dances that depict different roles and customs of the complex Ivorian culture. The company is known for its intricate footwork and interwoven rhythms, and the dancing and drumming is colorful and dramatic. Vado can present Gue-Pelou, the Tall Mask of the Forest, a breathtaking sacred mask danced on stilts, bringing blessings from the ancestors if a secure and private dressing area can be secured. This mask appears at the beginning of special occasions, dancing, chanting, singing, and blessing the event in a beautiful costume, and with acrobatic feats of daring. This mask brings blessings and protection, connecting everyone to the sacred world of the ancestors.