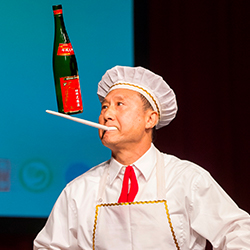 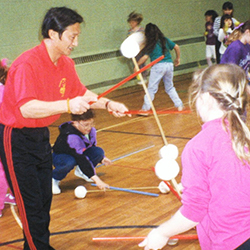 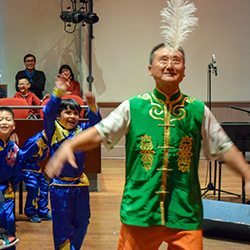 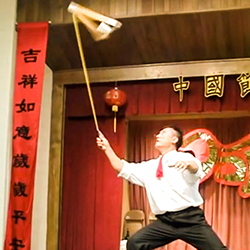 Husband and wife team, Yang Xiao Di and his wife Li Chang Mei have been touring internationally since 1999.  Yang Xiao Di specializes in a variety of traditional Chinese acrobatic genres including balancing, juggling, and clowning. He grew up in Shanghai and performed internationally with the Shanghai Acrobatic Troupe when he was just 11 years old. Later he joined the Nanjing Acrobatic Troupe and became a master acrobat and a professional acrobatic teacher. In 1984, Master Yang toured Europe starring in Circus Knie, the largest circus of Switzerland. In 1988, he came to the U.S. and joined the Big Apple Circus. He performed as the Monkey King, a famous clown-like character from traditional Chinese Opera, at “East meets West” at Lincoln Center. In 1993, he joined the National Circus Project as an internationally visiting artist and later became a senior artist/instructor. In 1999 Li Chang Mei began assisting Yang on tours and together they have presented Chinese circus to public schools and community centers throughout the U.S.

A live interactive assembly with glorious fun presented by Master Chinese Juggler Yang Xiaodi. The performance features comical routines and circus skills as students learn about the Chinese cultural context for the skill. Most of the props that Master Yang uses on the stage are common Chinese utensils such as plates, chopsticks, jars. For all ages!

Juggling helps children concentrate and practice balance and eye-hand coordination skills. In this workshop, students will be exposed to a variety of traditional Chinese juggling genres such as the ancient Chinese yo-yo (空竹 Kong Zhu), which is often found at traditional Chinese festivals. Workshop content will be accommodated to students’ grade levels. Students will have the opportunity to interact with different Chinese juggling props including silk juggling scarves, peacock feathers, devil sticks and beanbags, as well as learn about related vocabulary and folk terms. This program can be developed into a residency with a culminating performance. For grades K-12!